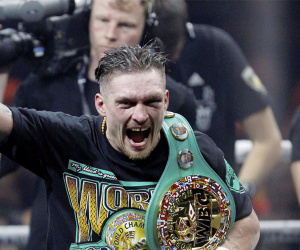 Who is Oleksandr Usyk? 20 Facts you need to know below

On Halloween night, Dereck Chisora could be in for a fright when he steps into the ring with history-making superstar Oleksandr Usyk on a Matchroom Boxing event behind closed doors.

Ahead of the heavyweight clash, BBN decided to dig up some interesting facts about the incredible Ukrainian:

1. Oleksandr Oleksandrovych Usyk was born on the same day as his hero Muhammad Ali on January 17, 1987, when Jackie Wilson was number 1 in the UK charts with ‘Reet Petite’. He was born in the second-largest city on the Crimean Peninsula, Simferopol. He is one of the most famous athletes to come from the city, but there’s also Yana Klochkova, a swimmer who has won four Olympic gold medals and one silver.

2. Coming from a poor background, young Usyk worked on a farm to make ends meet, grazed cattle, as well as collecting fruit (apricots and peaches), and selling ice creams – the exact same job his teammate Vasiliy Lomachenko used to have too.

4. The costs that came with playing football was too much for his parents, so in 2002, he switched to boxing and is a graduate of the Lviv State University of Physical Culture, specialising in sports education. FC Dynamo Kyiv’s Andriy Husin was also a student there, who was one of the most capped Ukrainian Internationals of all-time, but sadly passed away in a motorcycle accident in 2014.

5. He also tried his hand at wrestling, hand-to-hand combat, karate, but none of those really struck a chord with him until he discovered boxing.

6. His amateur career achievements are so incredible and illustrious they will have to be listed:

7. Notable defeats in the amateurs were to Matvey Korobov at the 2006 European Championships as a super-middleweight; then in the Beijing 2008 Olympics, he lost to two-time World amateur champion Clemente Russo in the quarter-finals, who went on to win silver. He also won silver in the next Olympics in London, which is where Usyk got a revenge win over Russo to capture the gold.

8. He chose to participate in the World Series Boxing, which is designed to bridge the gap between amateur and professional. He competed in the heavyweight division (91+kg) in the 2012-2013 WSB as part of the Ukraine Otamans team, winning all six bouts – two by stoppage.

9. He turned professional in 2013 at the age of 26 and signed a promotional deal with the Klitschko brothers’ K2 Promotions, and made his professional debut on November 9, 2013, defeating Mexican Felipe Romero via fifth-round knockout.

12. Continuing his meteoric rise, he became world champion in just is 10th contest. He defeated unbeaten Polish boxer Krzystof Glowacki (26-0 at the time) for the WBO World cruiserweight title in June 2016 via unanimous decision, which ended his knockout streak. Of his 17 fights, only five have been non-title bouts.

13. In September 2017, he joined the World Boxing Super Series (WBSS), an eight-man tournament that was destined to turn him into a P4P superstar. In the draft, Usyk landed the first pick and selected long-reigning cruiserweight world champion Marco Huck, who he stopped in round 10 of their fight. He then defeated unbeaten Latvian Mairis Briedis (23-0 at the time) on points. That set up a mouthwatering final with 26-0 WBA and IBF World champion Murat Gassiev, who had knocked out both his previous WBSS opponents, but Usyk triumphed with a wide points victory to make history as the first cruiserweight to win all four belts. He defended all of these honours to Tony Bellew in Manchester in November 2018, with an eighth-round TKO.

14. His transition to heavyweight was not a smooth one, as he initially signed up to fight tough Frenchman Carlos Takam (39-5-1, 28KOs) on May 25, 2019, but a bicep injury suffered in training cancelled that contest. The bout was rescheduled for a date in September, but then it was Takam's turn to withdraw. So, then the long-awaited heavyweight debut was announced for October 12 against unbeaten WBC and WBO Latino heavyweight champion Tyrone Spong (14-0, 13KOs), but a few days before the fight, he tested positive for a banned substance, so Chazz Witherspoon was brought in right at the last minute.

16. The colourful character is married to wife Kateryna and the couple have three children together.

17. A proud countryman, he declared he would never exchange his Ukrainian citizenship for Russian citizenship and that he considered Crimea as part of the Ukraine. He is extremely grateful for his Russian fans and does not divide “our peoples because we are all Slavs” in his own words.

18. Usyk is also a star on the silver screen! Well, not exactly, but he was cast in the Ukrainian version of ‘The Stolen Princess’, an animated film from 2018. He played the voice of one of two Troyeschyna gangsters, alongside strongman competitor Vasyl Virastyuk!

19. Similarly to his gymmate Lomachenko, Usyk loves to dance and often posts vidoes online of him grooving around in the gym, and even outside as well. In fat, he actually performs the hopak, which is a traditional Ukrainian dance. All that dancing could explain why he is so nimble and light on his feet!

20. That same year in 2018, Usyk was named Sports Illustrated ‘Fighter of the Year’. 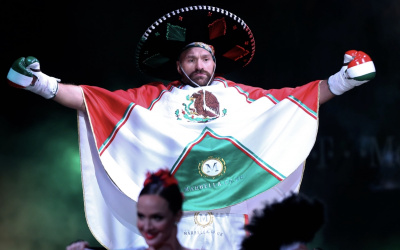