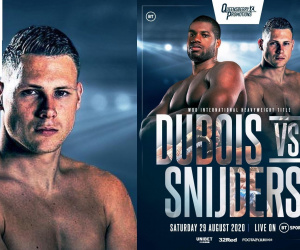 Who is Ricardo Snijders? Facts you need to know below:

He steps in with just a few days to go after original opponent Erik Pfeifer didn’t manage to submit his MRI on time. Pfeifer was a two-time Olympian and won two World Championships bronze medals; as a pro, he is the current WBO European heavyweight champion and unbeaten in seven fights. His name is well known in boxing circles, but Ricardo’s isn’t, having only operated at national level.

So, BBN decided to dig up some interesting facts about fighting Dutchman:

2. Born and raised in Heerlen, the city is a province of Limburg, located in the southeast of the Netherlands. Another notable sportsman from the area was Fernando Ricksen, who many Brits will remember as a Rangers FC player, who sadly died recently of motor neurone disease, aged just 43.

3. Snijders was a decorated amateur in his homeland, and was a BeNeLux amateur champion in the 91kg category.

4. On 2016, aged 21, he made his pro debut at the Cultureel Centrum Corneliushuis – a striking looking all-glass building in Heerlerheide. He took on winning fighter Emre Altintas (10-7-1), who fought future two-time world champion Mairis Briedis (15-0 at the time) in his fight before Snijders. Both Briedis and Snijders stopped Altintas in the second round, but Snijders was over a minute quicker to halt the shared opponent.

5. It wasn’t until his seventh fight that Snijders fought an opponent with a losing record, and he has now fought 13 fighters with a winning or level record, stopping and ruining two unbeaten fighters’ records in the process. His opponents’ combined record to date totals to 168-145-20.

6. He won his first title in his eighth fight – the Dutch cruiserweight title – back at the same venue he made his professional debut in. He then won the BeNeLux cruiserweight strap in his 11th bout, which is the crowning title for fighters from Belgium, Netherlands, and Luxembourg. In his next fight, in April 2018, he moved up to heavyweight to win his second Dutch national title and is still the titleholder, one of only 15 champions since the belt was formed in 1918.

7. His sole career defeat was to Belgian Joel Tambwe Djeko (17-2-1) in May 2019. Occupying the away corner, fighting outside of his home country for the first time in his career, he challenged the home fighter, known as ‘Big Joe’, for the vacant IBO Inter-Continental cruiserweight championship but was widely outpointed on the scorecards – 116-111 and 117-110 twice. He was down for the first time in his career in the 10th round but bravely managed to hear the final bell.

8. Three of his last five fights have been made at heavyweight, winning two by knockout and one via shutout points decision over six-rounds.

10. His forthcoming fight with ‘Dynamite’ Dubois will be his second contest abroad.

After training with Josh Taylor and Billy Joe Saunders, Lee McGregor plans to show what he's learnt against Ryan Walker